Netflix may be killing its competitors, but they're losing fans thanks to their reputation for rolling out interface updates without user knowledge or consent. PlayStation 3 owners were upset at the Netflix interface change earlier this year, and now nearly 5,000 diehard Netflixers are irate at the website's new look for its Watch Instantly section.

The focus of the new layout is definitely on instant streaming, removing sortable lists in exchange for large cover images. Movie titles are absent, forcing you to rely on the cover image to identify the content. And worst yet, ratings are also gone. In order to see the title or rating, you have to hover over the image for a second or two (depending on your Internet connection). The updated user interface seems more appropriate for mobile tablet computers, and doesn't work so well with the standard keyboard and mouse. But with ADHD on the rise, it's no wonder companies are kicking out the text and emphasizing the imagery.

And it seems like this new change is final.

Netflix's Vice President of Corporate Communications, Steve Swasey said, "Most of [the comments] have the same theme, which is 'what was wrong with it before?' What we're saying is we've tested this extensively, we know the vast, vast majority of people like this. It's new, it's easier, it's cleaner." He also went on to state that they were "absolutely" keeping the new interface. "We made it and tested it and researched it and tried it out and everywhere we tried it, it had a better reception. Otherwise we wouldn't have made the change."

Funny thing is, I don't remember being asked to test it. Nor do nearly 5,000 other Netflix devotees. If you're one of the many users frustrated with this new look online (like me), don't cancel your subscription just yet—there's a little trick to getting the old layout back.

That's it. You should be able to see the Watch Instantly section as it was before, which looks just like the current Browse DVDs section. There's only one problem—it only works for the front page. If you click on any of the different categories, you'll be directed to the new layout. To alter the category pages into sortable imageless lists, simply add the following to the end of the URL:

It's not ideal, but it's better than nothing and worth bookmarking so there's a little bit of familiarity to your web experience. These tricks should work on both Mac and PCs, but there's no telling when the links will be redirected to the new UI, so beware—they might not last long. 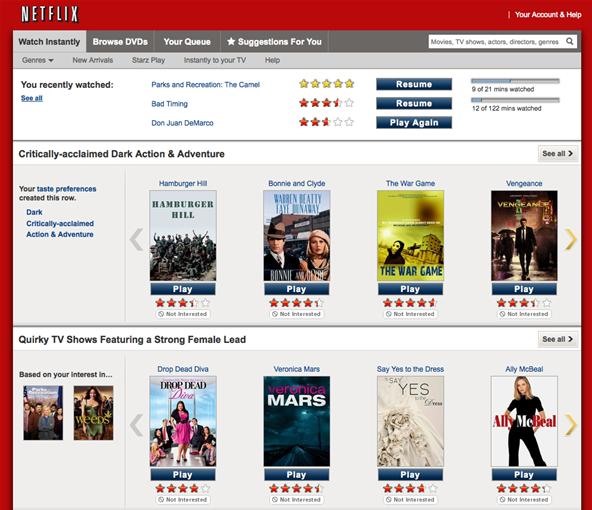 If you're using Google Chrome, there's also a Chrome extension that does all of the work for you.

Thanks to Scott for this awesome tip (from his comment on Netflix's blog article).

If only they would bring either one of these interfaces to the iPad.

Thanks a lot—hope this doesn't expire.

For those using Google's browser, it's probably best to stick with the Chrome extension. It works pretty good. Haven't had a problem with it yet, and it takes out all of the repetitive manual work.

I wish there wasn't a cap on Blogger for 5,000 comments. I'd like to see how many people would actually voice their opinion to Netflix about this matter. It's kind of lame to see it maxed out at 5,000 now.